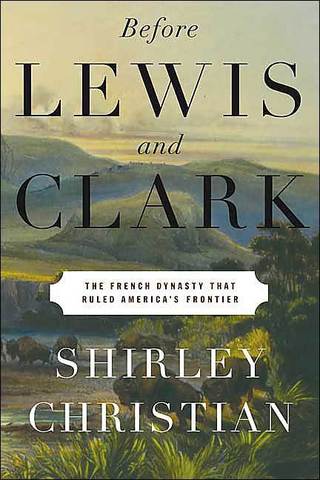 Before Lewis and Clark: The Story of the Chouteaus, the French Dynasty that Ruled America’s Frontier

The year was 1804. The young United States had just doubled its size with the purchase from France of a vast territory that would eventually form all or part of fifteen states. In the little French Creole village of St. Louis on the Mississippi River, where the half-brothers Auguste and Pierre Chouteau were the leading figures, there was great uncertainty about the future. Nevertheless, the Chouteaus and all of St. Louis welcomed Meriwether Lewis and William Clark as the two men prepared for their spring voyage up the Missouri River to explore the new lands and search for a route to the Pacific Ocean. Throughout the winter months, in this outpost seemingly beyond all civilization, the Chouteaus regally wined and dined the explorers and shared their knowledge of the Indians, the rivers, and the flora and fauna of the region. It was the beginning of a relationship that would continue for as long as any of them lived.

Before Lewis and Clark is the extraordinary saga of the Chouteaus, the dynasty that guarded the gates to the West for three generations. From St. Louis, founded by the family four decades before the arrival of Lewis and Clark, the Chouteaus built fortunes as land speculators, financiers, Indian agents, and, above all, fur traders. Later, to expand the fur trade in partnership with John Jacob Astor, they pushed steamboats to the limits of the vessels’ endurance, conquering most of the two-thousand-mile length of the turbulent Missouri River. They put down the earliest European roots at the future site of Kansas City and in present-day Oklahoma and left their imprint on other lands stretching to the Canadian border.

Before Lewis and Clark tells the story of the Old World meeting the new, of the eastern United States discovering the West--and of a wealthy, powerful, charming, and manipulative family that dominated business and politics in the Louisiana Purchase territory before and after the Lewis and Clark expedition.

"Lewis, who was twenty-nine years old, and Clark, thirty-three, were the honored guests at balls graced by the beautiful and charming daughters of Charles and Victoire Gratiot, the handsome sons of Pierre Chouteau, and the numerous young adults in the families of the two other Chouteau sisters, the Papins and Labbadies. Whatever conflicts might arise between people speaking different tongues were easily dispelled amid rustling taffeta, gleaming silver, and flickering candles reflected on polished walnut floors. Enveloped in this flirtatious Gallic setting, the soon-to-be explorers found themselves almost giddy with delight. House slaves served wines and brandies from France, rum from the Caribbean. Tables were laden with food.

"Implicitly, amid all the gaiety, a deal was being struck under which the Chouteaus would do all they could to help Lewis and Clark succeed on their daunting voyage. The Americans, in turn, would help assure for the Chouteaus an influential position with the new power in the region, just like the one the family had enjoyed under the French and Spanish."

"This time ... in addition to Pierre (Chouteau) Jr., John Sanford, and the usual contingent of voyageurs and other fur-trade workers, it carried the artist George Catlin. After establishing his reputation as a portrait painter in Philadelphia, Catlin had been captivated by his first view of Plains Indians, and he decided to devote years to traveling and painting them. He arrived in St. Louis in the spring of 1831 and made contact with William Clark, who took him up the Mississippi to Prairie du Chien for an Indian council. The following year, Catlin made arrangements with (Pierre Chouteau Jr.) to ascend the Missouri on the second upriver voyage of the Yellow Stone. ...

"Catlin’s travels on the Yellow Stone were doubly useful to historians because, in addition to sketching and painting events and people, he wrote letters and articles that were published in newspapers and magazines. Through these, he left a lively firsthand description of events deep within the North American continent well ahead of white settlement--or the arrival of the telegraph. ...

"'The Missouri is, perhaps, different in appearance and character from all other rivers in the world; there is a terror in its manner which is sensibly felt, the moment we enter its muddy waters from the Mississippi,' Catlin reported. 'From the mouth of the Yellow Stone River ... to its junction with the Mississippi, a distance of 2000 miles, the Missouri, with its boiling, turbid waters, sweeps off, in one unceasing current...’

"Catlin observed that 'the almost insurmountable difficulties which continually oppose the voyageur on this turbid stream have been by degrees overcome by the indefatigable zeal of Mr. Chouteau, a gentleman of great perseverance, and part proprietor of the boat.' ...

"Along the route, Indians came to the shore to stare in amazement at what was passing upriver. 'If anything did ever literally and completely astonish (and astound) the natives, it was the appearance of our steamer, puffing and blowing, and paddling and rushing by their villages,' Catlin wrote."

"From his earliest days, Auguste Pierre Chouteau, (Pierre Jr.’s) older brother, displayed immense potential. He finished fourth in his class at West Point, was cool under fire, had a commanding presence, and was highly intelligent, brave, generous, handsome, and charming. As he matured, he had the manners of the French drawing room and the suntanned vigor of an American cowboy. Probably no one from the Chouteau family so bridged the three cultures in which they lived--French, Indians, and the American frontier’s--as did Auguste Pierre.

"His skill in dealing with Indians matched, and possibly exceeded, that of his father. The Osages came to consider him 'our old and well tried friend.' He was once ready to lead them into battle to defend the United States from the British. But any Indians prone to horse stealing and other thieving found that he could erupt into a rage and threaten eternal exclusion from the right to trade with white men.

"He was a witty raconteur and spinner of stories who enchanted educated travelers to the exotic West. Women flocked to him. As a youth, he won the admiration of William Clark. Later, Sam Houston found him a great drinking and gambling buddy and fellow schemer against the ways of Washington. Andrew Jackson and his Cabinet Secretaries regarded him as a man of wisdom and reflection."

Before Lewis and Clark: The Story of the Chouteaus, the French Dynasty that Ruled America’s Frontier
"An inspirational account ...A Pulitzer Prize-winning journalist whose carefully researched work ...weaves the Chouteaus’ story seamlessly into the development of the frontier."

Nicaragua: Revolution in the Family
"Anyone seriously interested in contemporary Nicaragua will have to read this book."