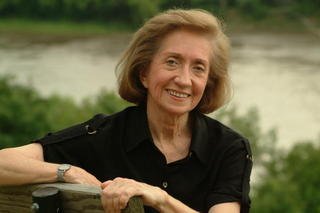 Photo credit: Don Ipock
Shirley Christian on a bluff beside the Missouri River.

Shirley Christian is a Pulitzer Prize-winning journalist and author. Her most recent book, Before Lewis and Clark: The Story of the Chouteaus, the French Dynasty that Ruled America’s Frontier, was published in April 2004 by Farrar, Straus & Giroux. Previously, she was a foreign correspondent for The New York Times, The Miami Herald and the Associated Press.

She lived and worked in numerous countries of Latin America for nearly 20 years, and in New York and Washington, winning the Pulitzer for international reporting in 1981 for articles published in The Miami Herald about the wars in Central America. Her first book, Nicaragua: Revolution in the Family, was published in 1985 by Random House.

In addition to books and her work on newspapers, Shirley Christian has written magazine articles for The Atlantic Monthly, The New Republic, The New York Times Sunday Magazine, and other publications. She was an adjunct professor of journalism at Columbia University and the University of Kansas.

She lives in Kansas City.

Before Lewis and Clark: The Story of the Chouteaus, the French Dynasty that Ruled America’s Frontier
"An inspirational account ...A Pulitzer Prize-winning journalist whose carefully researched work ...weaves the Chouteaus’ story seamlessly into the development of the frontier."

Nicaragua: Revolution in the Family
"Anyone seriously interested in contemporary Nicaragua will have to read this book."